Hopefully I’ll be back up to date with my blog (don’t hold your breath) just had my internet repaired for the third time, so for the moment it’s back to being rubbish as opposed to none existent. This is some of what’s been going on in Sheffield. 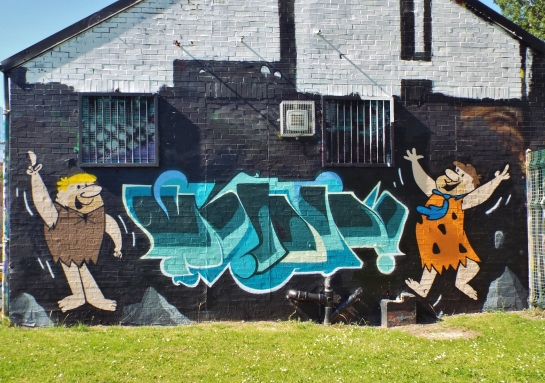 Yabba Dabba Doo! Love it, can’t read it though…. although I am informed it’s Deap. (thanks to my secret mine of graff information) 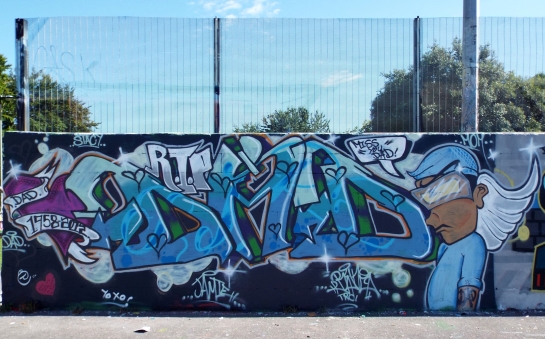 Touching tribute wall by Byne for his dad. 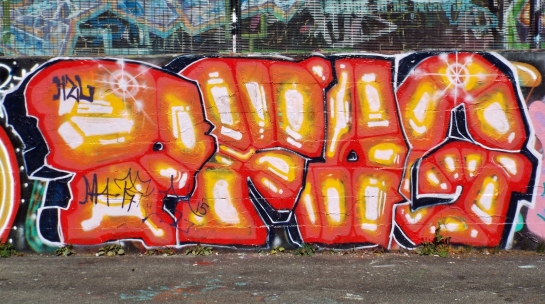 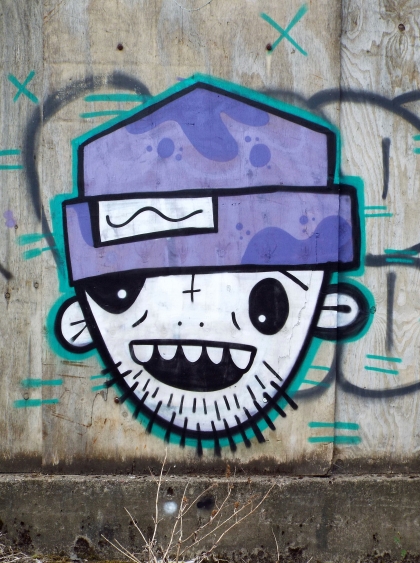 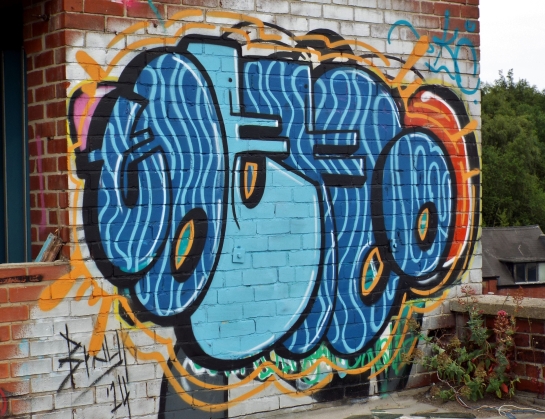 Little ray of sunshine, seen a few of these now, always make me smile.

STOG x Meth A Trik9, a rhapsody in blue, fantastic!

Double Rocket01, does it get any better than this?  😀

Brayk Graff, kind of cute , kind of creepy, a bit like me 😉

Coloquix’s lady is beginning to write…and so is her cat, lovely.

No idea, but I like the colours,some one should give me a job as an art critic…….I’d be absolutely useless! Ha! 😀 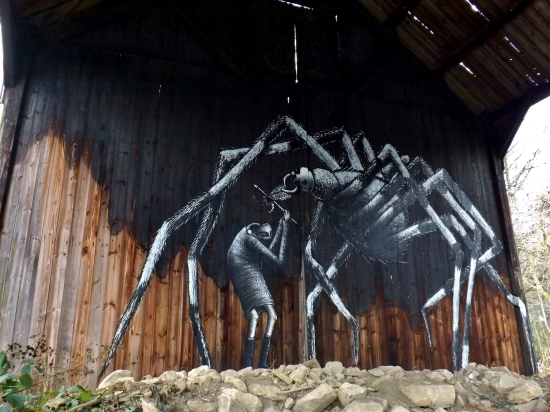 Along came a Spider, so happy that Phlegm paid us a visit, love this so much, it was worth the brambles and everything. 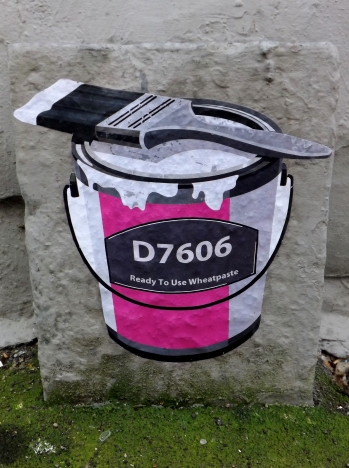 D7606, ready to use wheatpaste, my favourite shade. 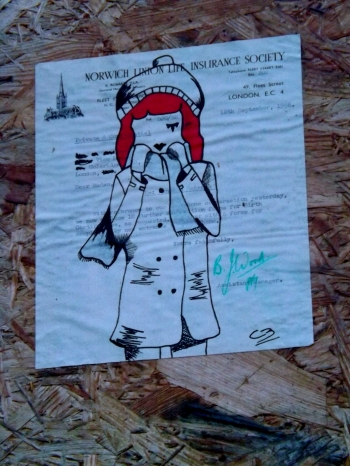 C3, these ladies are developing nicely,gorgeous. 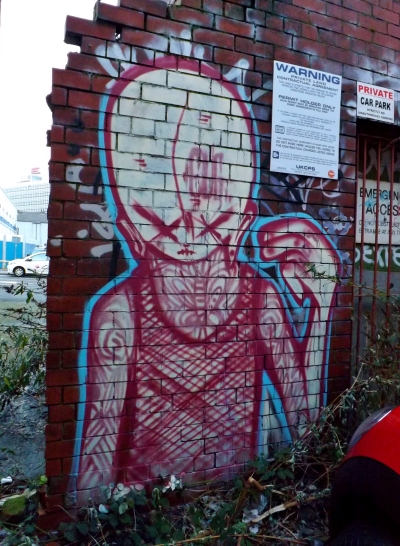 Eug, got a strange taste in underwear, like the tattoos though. 🙂 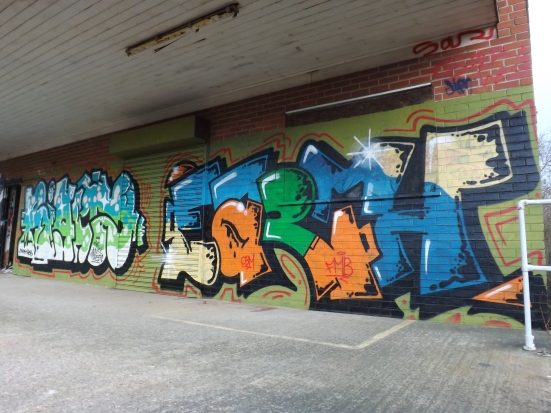 Rialto and Earth, getting busy, which is a good thing I think. 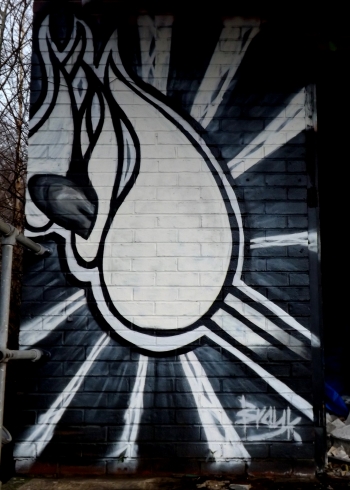 Brayk Graff  ‘The coldest flame in Sheffield’, know the feeling. 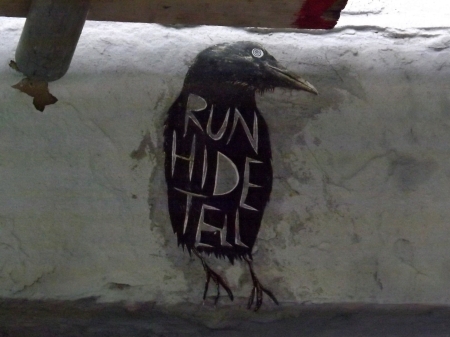 This Alex Ekins Raven wheatpaste is definitely one of my favourites.

Evo, Pawski and Shoe,very handsome portrait of a fellow in the middle there 😉

Coloquix, seeing double and with the reflection almost double double!!

Skint and Sico, way too cool for school.

Class of 2015 by CoLor, I’m particularly fond of the little details on this.

Hungry Horace seemed to disappear altogether, but perhaps not,this doesn’t look new but it’s certainly not as old as his other stuff, the plot thickens….

When I saw this on Phlegms blog, I was really pleased because I knew exactly where it was. Getting there however was a bit of kerfuffle to say the least. We battled a steep slope with vicious brambles and nasty pointy cast iron railings and I nearly lost an eye. Once in, the painting was covered in frozen snow which we had to scrape off to get a picture. Rather than face the brambles again we decided to go over the 6ft fence onto the pavement where my less than graceful dismount was greeted by a round of applause and much laughter by men working in the unit across the road. 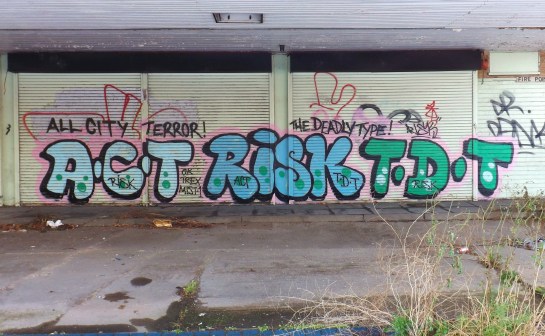 Luckily not all works are that hard to reach, for some you just drop lucky and nature does the hard work for you, like making the fence fall down in front of this Risk piece. 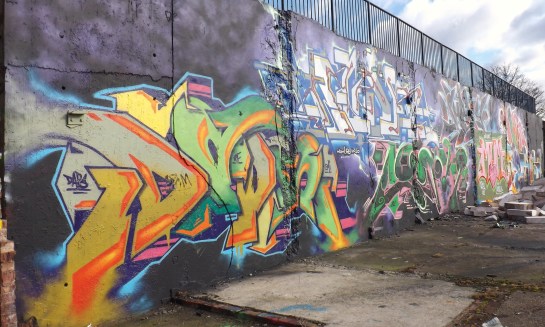 This wall is in a rather run down part of the city and in a location where you would have to purposefully go to it to see it. Despite this fact, when certain local writers approached the council about the wall being given a legal status for graffiti, they were turned down.

I’m not sure whether there has been renewed activity from Horace or whether there are just ones I hadn’t found before. Nice to see him anyway.

Bob, I like a bit of Bob, he has various styles, this one is almost childlike to me and yet very skilful, not that I’m a qualified critic, obviously. 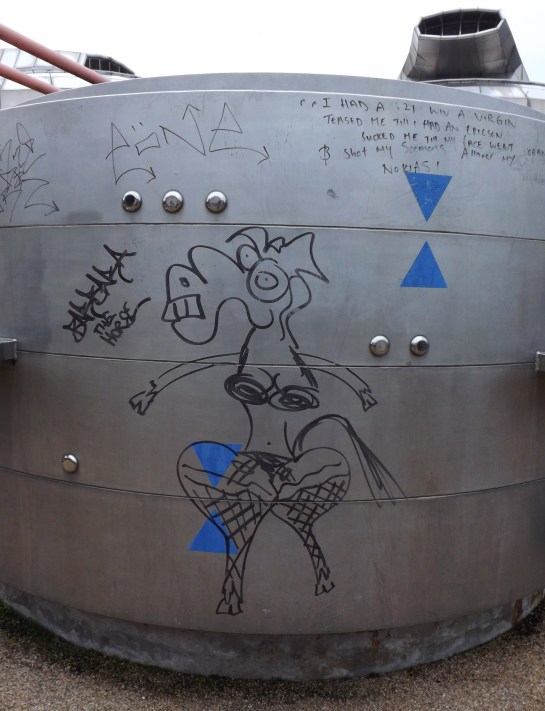 Barbara the Horse is one of my most favourite characters, seen in all manner of locations about the city. She brings a smile to my face every time I see her. She epitomises what I love about graffiti, that it’s there for everybody.

I’ll start with a contradiction, all Hungry Horace pieces and installations are by water, except this one!

I’ve put the Horaces in an artist specific post instead of place because they are quite unique, they’re not in the usual graff spots and well, I think they’re just a little bit bonkers.

The range of materials used has at times been mind boggling.

I mean this has taken real time and effort to set up.

That’s dedication and self belief that is. 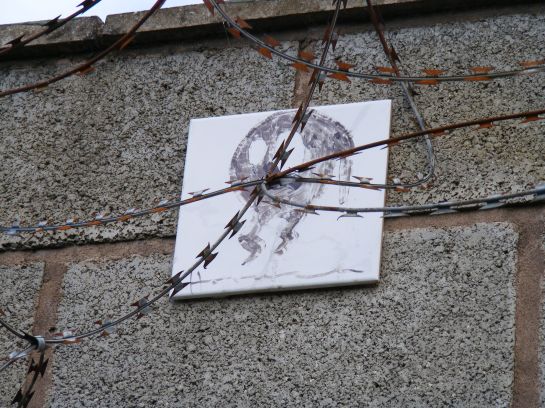 And attention to detail.

What does it mean? I have no idea…

Sadly most of the installations were dismantled quite rapidly, whether by vandals, well meaning trophy hunters or Mother Nature, I’ll never know. Many of the paintings have been ‘cleaned off’ which is so frustrating. I covered the Sheaf Valley Trail and most of the Porter Brook, places I had never been before, looking for Horaces,  they are hardly vandalism. I really wish the protectors of these local areas, who in general I really admire, would realise that features like this can add to an urban trail and actually draw the public in.

After all who can look at a Horace without smiling, even if they are scratching their head at the same time?